Move On from the Post-It Note

The story goes that in the sixties a scientist at 3M was trying to develop a strong adhesive – but failed. Instead he created a “low tack”, reusable adhesive that could be activated by pressure. The company wasn’t quite sure what the practical application for this invention might be until it was applied to sticky notes in the seventies. And the rest is history.

I mention this because the post-it note has become ubiquitous throughout the business world, and along the way, has become the number one tool of choice for brainstorming, hackathons, and any situation where people are collaborating and engaging with concepts and ideas.

And what brilliant things they are! They can be moved, grouped, color-coded, stacked and sorted in a very tactile and interactive way. And of course, what team hasn’t been asked to assign their votes to identify the most popular items.

But what happens once the meeting is over? Someone is assigned to take a photo of the board or remove the now colourful flipcharts and transcribe the results and actions for everyone to share.

Some things to consider:

Now let’s turn to the future. 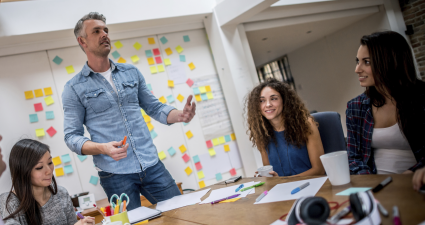 Twelve months on the team is holding another planning session, but of course some people have departed and there are several new folks on the team. One of the new people comes up with an idea. An old timer says, “We considered that last time.”. Where do you go to find the context of that discussion and the conclusions for that particular suggestion?

Everyone intuitively understands that organisations consist of three constituent groups – those that were there before, those active currently and those who will be in the future. The challenge is how to retain a collective “organisational memory” across an essentially transient population? How do you avoid the “we tried that before and it didn’t work” syndrome?

Idea Management helps solve this problem by becoming a repository of ideas over time and, more importantly, the outcomes and discussions around those ideas.

So, Post-It notes are wonderful way to make abstract concepts real and interactive for a group of people in the same physical space - but they have some serious limitations as a medium for retaining ideas in a modern business environment.