New Zealand can learn from how the Japanese embed innovation

I visited Japan this month, a country I once lived in for three years, working on the product development team for a consumer electronics company. Visiting the World Headquarters of Alpine Electronics reminded me of how much the Japanese prioritise innovation. I nostalgically recounted how innovation is normalized and engrained through the day-to-day working activities, embedded as a driving principle of the culture that employees feel both connected to and responsible for.

The genesis of New Zealand ingenuity can be found in a term from the 1800’s – ‘Number 8 Wire’. This colloquialism has roots from the farm, denoting an ability to create or repair machinery using whatever scrap materials are available on hand. This approach was built on resourcefulness and DIY, all excellent attributes, however innovation has evolved and requires collaboration and investment in infrastructure. When I worked for Microsoft New Zealand, Global CFO Chris Liddell (a Kiwi) came to New Zealand and encouraged NZ firms to start focusing more on outputs and going beyond the temporary #8 wire fixes that makes upgrading and future change even more difficult. He also, said that New Zealand organisations must find ways to innovate, as innovation is an underlying principle to growth.

As Japan has been doing for the better part of 50 years, it’s time that New Zealand organisations begin to systematise their approach to innovation. To maintain relevance they don’t have a choice, change and disruption is moving at an exponential rate. Perhaps that lack of a continuous improvement culture and front-line empowerment is having a bigger impact on our ability to adapt, as displayed by the innovation rankings (Bloomberg 2019 Innovation Index). 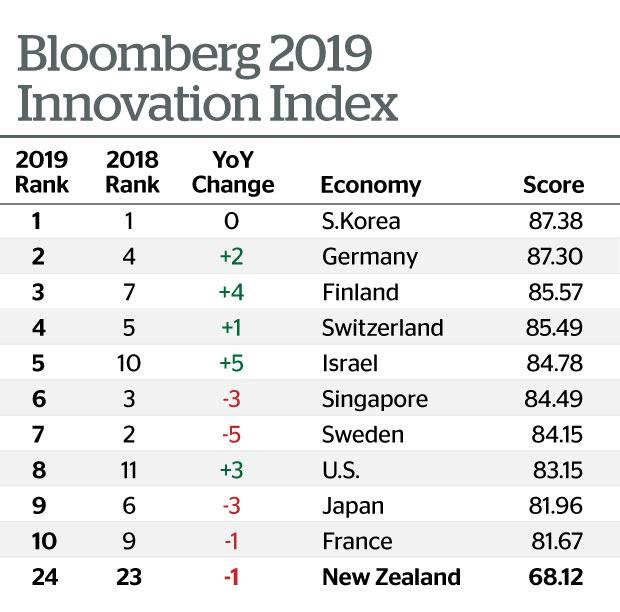 Japan has been a leader in innovation, especially in global health. Twenty-three Nobel Laureates have come from Japan. When it comes to 21st century Nobel winners in the natural sciences, Japan ranks second only to the United States.

When I worked in Japan, I was part of the front-line commitment to kaizen (continuous improvement), capturing front-line insights and executing on ideas that were generated from staff. We also had a weekly focus on the development of IP. In effect, creating an organisational memory of all the great ideas. In the 1990’s Japan was number one in the world with patent applications. Other countries have seen the value and Japan has slipped to number 3 with China’s IP office receiving the highest number of patent applications in 2017, followed by USA, Japan, Korea and the European Patent Office.

Today Japan is 9th in overall innovation compared to New Zealand’s 24th in the Bloomberg 2019 ranking process, which measured more than 200 economies. Each was scored on a 0-100 scale based on seven equally weighted categories. Nations that didn’t report data for at least six categories were eliminated, trimming the total list to 95.

Embracing continuous improvement and innovation is an essential component to the well-being and prosperity of New Zealand. New Zealand has a highly trusted reputation and it is now time to go beyond the #8 wire jerry-rigging mentality and start embedding systemic processes that enable the capture and collaboration of the rich creative thinking that lives in this fertile land.

Collaboration is the only plausible mechanism to effectively adapt to the exponential speed of the emergent future.

Japan's comeback is rooted in automation